Where Have You Been?

I went on a trip. It began on the east coast of Korea, in the town of Gangneung. I visited two beaches called Gyeongpo and Jeongdongjin. These beaches are famous for their sunrises because they are on the east coast and you know how it is with the east and sunrises. It was not disappointing. On my first morning in Gyeongpo (which is where I stayed), I woke up at 5:30 and went to the beach and swam as the sun rose. Eventually the lifeguards came and said it was too early to swim but it was already too late because I was swimming back to shore.


Other things in Gyeongpo include a Thomas Edison museum. I do not know why there is a Thomas Edison on the east coast of Korea, but there is. It was focused on the miraculousness of light, sound, and picture which Edison, with his light bulb, gramophone, and motion picture cameras, helped to make more conveniently and controllably miraculous. It was a fun museum. There was an exhibit of light fixtures from across the decades, including ones designed to impress people at museums and world fairs. An attendant flicked a switch and they went flashy. They also played really old sound canisters and gramophones, with records from the twenties and canisters from when they used canisters.


One thing I learned was that it was smart to hang around when a Korean tour group came into an exhibit because usually the tour guide would flick a switch or play music.

Another thing there was a hall of TVs from the very first tubular wonder on up till the late 80s. This was very nostalgic and profound. TV has pretty much been the most important thing ever.


There's another museum in the mountains near Jeongdongjin. It's an art museum called Hassla. It was a long walk, but worth it.

Many strange exhibits lurk about in the hills and forests surrounding the museum (which is also a hotel and restaurant).  There were exhibits you could see, like sculpted spiders and giant blow-fish, and exhibits you could interact with, like holes in the ground with a ladder inviting you to climb down into the dark. 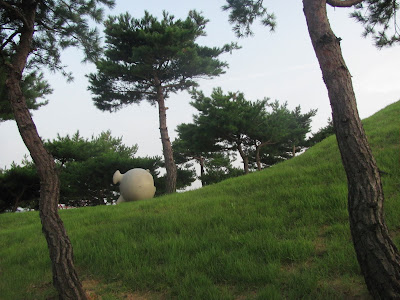 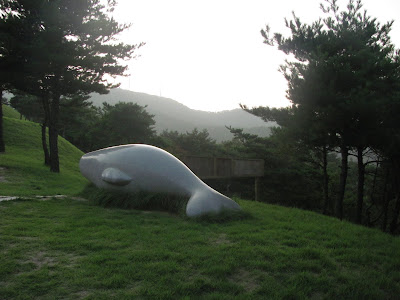 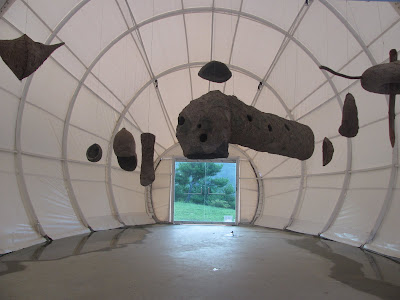 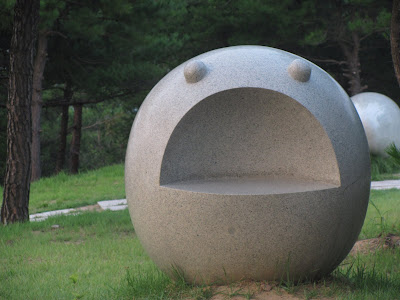 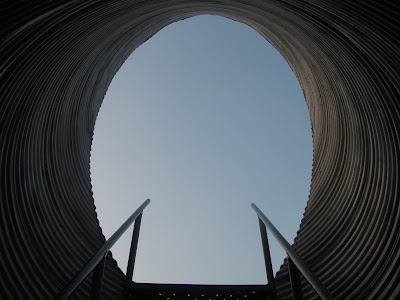 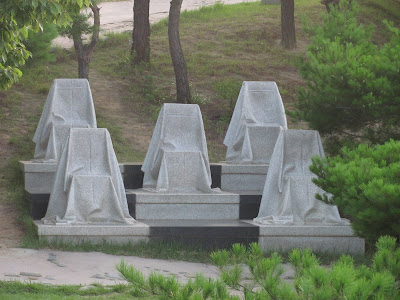 After strolling around and being weirded in fun ways, I ate some food in the restaurant. Since it was late I asked for them to call me a taxi. I knew I could do this because earlier in the afternoon I did it at a coffee place in Gangneung called Terra Rosa. The coffee place was the greatest thing ever since television, but since I forgot to mention it before I guess it's too late to talk about it now.

After riding home, I went to sleep and woke up and got on a train that headed south along the coast and then curved into the mountains. It was a morning train so there was the sunrise again. 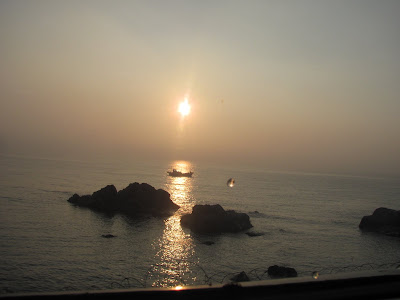 I got off in a town called Yeongju and went to a very old temple called Buseoksa. The story goes that a monk went to China and studied Buddhism and also learned of the Chinese plans to attack the Silla Kingdom (one of three kingdoms that eventually became what we call Korea). He, being a monk, decided the thing to do was to build a temple in the mountains to appease the spirits and so fend off the Chinese. Alas, there were people in the mountains who did not want a temple and they said no. The monk was sad. He tried again. He said if they did not say yes, bad things would happen. They said no. The monk went away again, quite sad, and then came back. The people gathered. They were prepared to say no again.

And then it started to rain rocks. One of which seemed to float above the earth. The people decided maybe they should say yes.

And so Buseoksa, which means 'Floating Rock', was built. 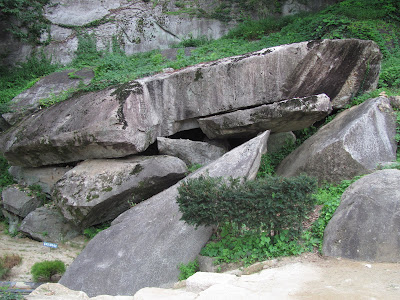 Another part of this story involves a girl who fell in love with the monk in China. Alas, as a monk, he could not return her love in the way, presumably, she wanted. Upon learning of the monk's going back to Korea, the girl raced to the port to say goodbye. She arrived too late, though. His ship had already left. The woman then did what any unrequited lover would do in similar circumstances. She dove into the water and became a dragon. She protected the monk's ship across the oceans, and followed the monk into the mountains. When she saw the trouble with the locals, she picked up rocks and dropped them about. She buried herself beneath the site of the temple so as to always protect it. The monk, finally wising up to things, dug wells which were always to be full of water for her to drink. 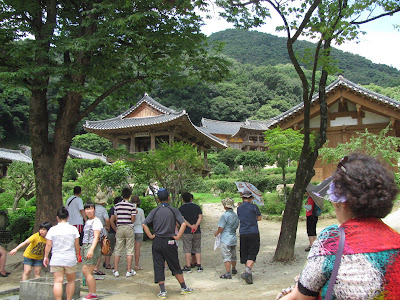 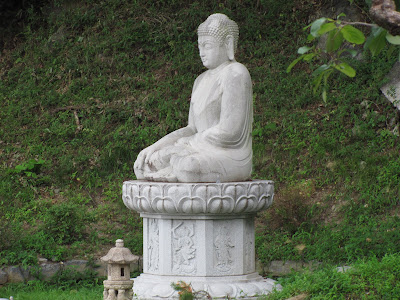 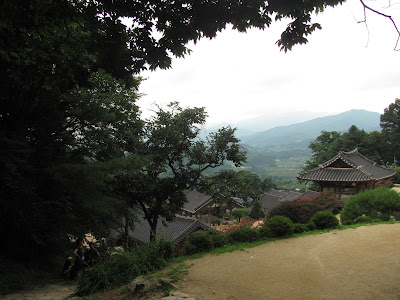 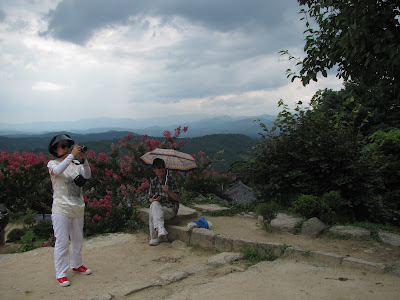 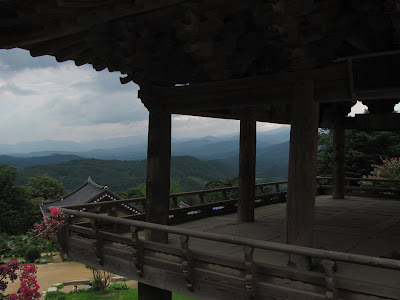 That's the kind of place Korea is.

It's bigger than Seoul.

Though I imagine Seoul has a few dragons buried beneath it, if you just knew where to look.

At Buseoksa, I met two people. One was called Henry. He is the one who told me about the place and its stories. He was a tour guide. We talked for an hour or so about the dragons, and floating rocks, and lost loves that made up this place. He was sad when he had to leave to go lead a group of Koreans on their scheduled tour.  Here's his picture. 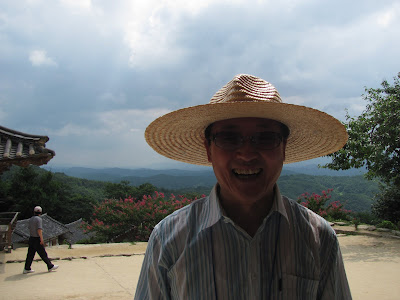 The other person I met here was a girl who was also traveling alone. I did not know her name when I said hello in the mountains, but then she was there in the tourist info building when I grabbed a map and tried to decide what to do after all the business with dragons and rocks and love.

I said hello. I found out her name.

She said she was going to a Confucian school nearby. Since Henry the tour guide had also told me to go, I said okay.

If you've seen any of Richard Linklater's movies, specifically Before Sunrise, or maybe Before Sunset (I forgot which), you'll have a pretty good idea of how the rest of the day and night went. Lot's of talking about traveling, and family, and stars. A long search for a coffee shop in a strange town where there were seemingly no coffee shops but a nice amount of stars to talk about. We did eventually find a coffee shop though, and we got asked not to put our feet on the chairs. We also discussed where we were going next.  Maps were unfolded. Scribbles explained. Homes pointed out. She was headed north to Jeongdongjin, to see the sunrise as I had done. I was headed south to Busan, which was her home. This struck us as incredibly interesting. Sometime around eleven, the coffee shop kicked us out. We walked some more. She made me a list of things to do in Busan. Sometime around midnight, we went to our hotels. She to hers, and me to mine.

In the morning, I went south to Andong, a place featuring a traditional folk town and a mask musem.  The museum has masks from Korea and the rest of the world. Many of them are shaggy masks, some of them are wooden. A few are made of paper. They were all used by different countries for different sorts of rituals at one time: funerals, exorcisms, satire, but the point of it all was that the wearing of masks granted the wearer a certain power to unleash primal forces.

It reminded me of superheroes. 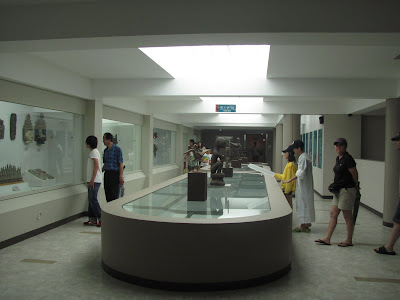 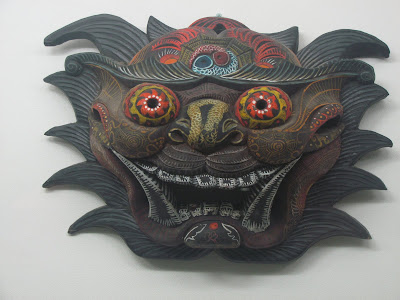 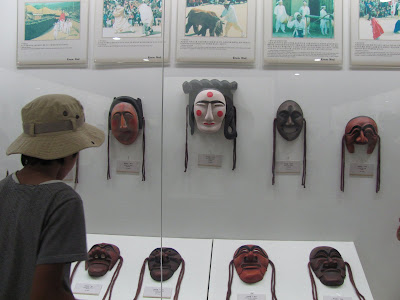 I wandered around the folk village their for a bit, got happily lost, and then visited a seven hundred year old tree possessed by a goddess. Many of her limbs and the gate around her had tied about them messages written on ribbons. I wrote three. One, concerning kindness and babies as stolen from Kurt Vonnegut, another for some people I know, and one for random happiness. 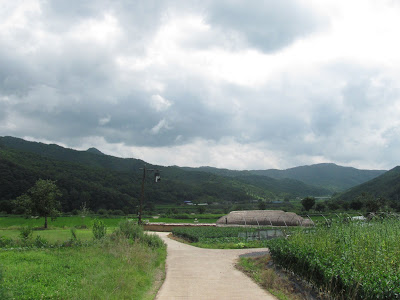 Next was the train south to Busan, which is on the coast, and full of mountains (Korea may, in fact, just be one giant mountain), and reminds most Americans of Seattle or San Francisco. I would not disagree. Everything seems open there, and bright, and colorful, in a way that Seoul, with its many buildings, and few trees, and distant mountains that circle, rather than inhabit it, fails to be sometimes.
In Busan, I stayed in something called a jjimjilbang, which is a Korean 24 hour sauna. You pay 10 bucks, get a locker, and have access to saunas and pools and a relaxing area, where many people relax with beer and talking.  Eventually, if you're lucky, they go to sleep. Which they did, and I did, and then I woke up and explored Busan, leaving my bags in the locker at the sauna.

I followed the list, for the most part, just adding things to my fancy, such as doing the sunrise thing along the shore and visiting the fish market at Jagalchi to see the market do its early morning thing. I ate breakfast there. It wasn't too hard to eat fish, since, having watched the boats go out and come in, I couldn't really with any honesty say that I didn't know my food was local and loved and worked for.

The breakfast was very good. 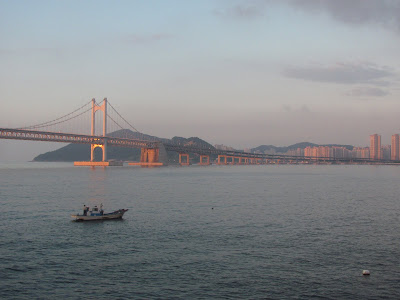 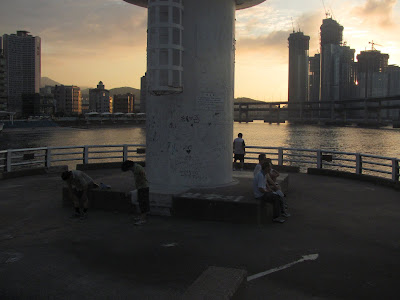 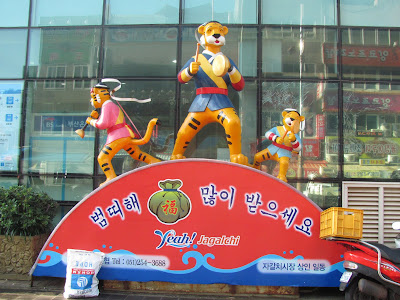 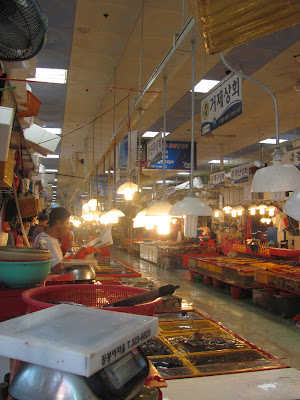 There's an island/islet in Busan called Dongbaek. It has a lighthouse and mermaid, among other things. I met a random guy here and he was Korean. He spoke with a British accent. He told me where to go for lunch.

It was a brunch placed called something I forget. I went there after the island and had a very good salad with lots of cheese and olives and tomatoes.

And then I walked along a beach, but did not go near it, because it was full of umbrellas, under which people sat. It was hard to see the sand. 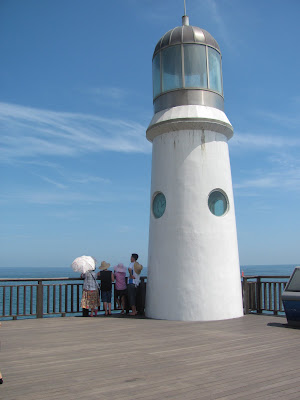 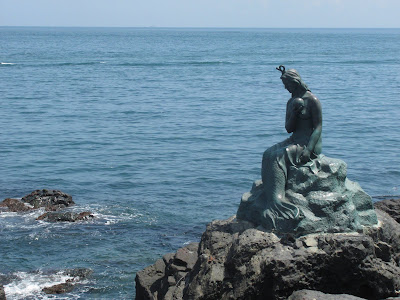 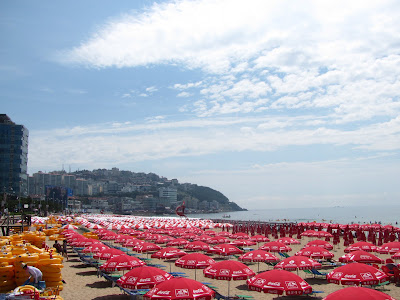 I ate a kind of dinner/dessert at a cafe along the shore. Something called a bingsu here, but most of you would recognize it as shaved ice topped with fruit and red beans (adzuki).

There was a bit of trouble at the train station getting home because my check card had seemingly been damaged during all this traveling amongst dragons and mermaids and lost loves, but happily, I had 40,000 won left, and while that wasn't enough for the bullet train, it was enough, with the help of a kind clerk, to get me on a train north that was slower and would, eventually, come to a city where I could transfer to the bullet train and get home a little faster.

So I did that. And, many hours after sunset, and before sunrise, I arrived back in Seoul, among the giant buildings, and the no trees, and the many people, and the stars that you know are there but, in Seoul, have gone missing.

It's a wonderful town, really, but a star or two, here or there, wouldn't hurt.

Very easy to find a coffee shop, though. You gotta give it that.