Snow, Rice Pizza, Tim Burton, And So Much More. (Really. A lot of words here. Be careful) 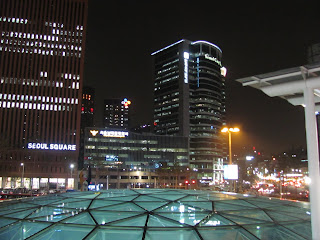 Today found me in Seoul, as often happens of late since, as of last week, I live here.

Generally, this is how my routine has shaped up.

I wake between 6:30 and 6:50 a.m. I make some kind of tea called Sulloc Solomon Seal Tea*, which is brown and tasty and presumably not made from actual seals. Then I turn on my laptop, play some music (a lot of Beatles recently), and make breakfast--generally something egg-based since I've run out of oatmeal for the moment. This morning, for example, I made an omelet stuffed with left-overs (tofu, rice, spinach, some anise seeds, green onions...)

Somewhere in here, I take my shower. Usually between making tea and making breakfast. My showers take somewhere between five and ten minutes, which is about the right amount of time for the tea to go from scorching hot to pleasantly toasty.

After breakfast, I slip into some combination of dress shirt, tie, suit, sweater/long-sleeve shirt, and converse all-stars. This is what I'm wearing to work right now. A lot of teachers wear suits, some don't. Very few wear converse. We all wear sandals inside the building, though, so maybe everyone wears converses. It's possible. Converses are popular here.

Eventually, I may stop wearing a suit and tie. I'm not sure. When I teach, I take off the suit, and keep the shirt. So, it's possible, as it warms, I'll leave the suit, and maybe the tie at home. Depends mostly on fate and whim and whether I end up buying a lot of fashionable ties and things at one of the many cheap fashion alleys all around Seoul. 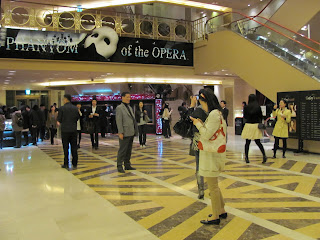 Work is like this: All of the high school teachers have desks in one big room.

To my right, is a man named Ming, who isn't merciless at all, but actually quite kind. He showed me around the school, and, once, when it was snowing more than today, he picked me up in his car and drove me to school.

In front of me, is a woman whose name I often forget, though she told me I could call her Sylvia. I think it might be Mrs. Lim. She is also kind. Today, she showed me where the nearest Imsil Cheese Pizza was. This is a chain of pizza restaurants who make all their dough exclusively with rice flour. Good for the gluten sensitive.

Around me, are many other teachers, who have also done for me acts of kindness, but space and time concerns lead me to sum up as such: my co-workers all want me to feel at home, and, as much as possible, they want to make sure I can find enough to eat.

I've been taught, for example, that most restaurant folks will understand, "No meat," and a good expression for wheat flour is "Milkaru."

I would write "Milkaru" out in hangeul (Korean alphabet) for you, readers, but I'm not sure how to make my keyboard do that. 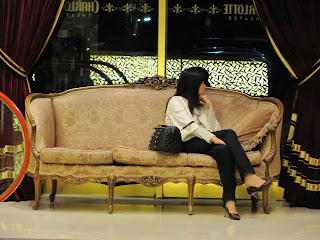 And then there's teaching, of course, which goes something like this.

The bell rings and I, plus whoever my co-teacher is for that class (technically, us native speakers aren't certified to teach in Korea and so one who is certified must always be present), go to the students' classroom.

That's one of the odd things about Korean schools (at least this one.) The students have a room, which the teachers go to. There's no milling about in the hall for students as they make their way between classes. Milling here is strictly for the sake of milling--and sometimes visiting the teacher's office.

The other odd thing about Korean schools (at least this one) is the way that the students all scream and giggle when I enter the room. Or the way, when they see me in the hall, they sometimes gasp, or sometimes duck their heads, or sometimes manage to say, "Hi."

Sometimes it does feel a bit like being a pop star.

But, mostly, once class starts, teaching here feels like being a teacher anywhere--with the exception that the girls in this school are excessively well-behaved and there being about, oh, 600 or so of them that I see in a week.

I dearly wish I could know all their names, but I'm not sure it's possible. I tend to like doing impossible things, though, so you never know.

Two days a week, I'll teach after school classes to 15 students, so, hopefully, I'll get a chance to know them.

Also, a member of the debate club personally asked me, in fluently fluent English, to come to their meetings, and I plan to, as often as I can.

If, at this point, you're wondering what it is I'm teaching them, then I will tell you. If not skip ahead, or pretend that you were and read on. 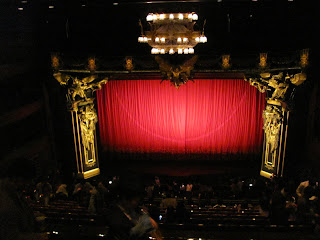 Right now I'm teaching them about me, for the most part. About where I'm from (Music City=Taylor Swift) and about what I like (Kimchi, Harry Potter, Comic Books, Time Travel and Buffy the Vampire Slayer, among other things). I try to mention things they'll recognize. Buffy they never recognize, but the mention of "Vampires!" almost always leads to a lively discussion of Twilight and whether Edward or Jacob is the more handsome.

After the me-ness, we play a game wherein the students write down things that are important to them. This gives me a chance to walk around and learn things about them. It's sneaky, really. But it's how I know that there's an abundance of Spongebob and Simpsons fans, at least one die-hard devotee of Tim Burton, and several girls who would like to grow up to be either a stewardess, diplomat, or counselor.

It's occurred to me that if I can't remember their names, maybe I can just give them nicknames--I often remember things about people more than their names, at least at first. Which means someday I can imagine saying something like this, "And Tim Burton, what are you passionate about?"

That will be a fun day.

I realize readers, at this point, that this post is fairly long and I've yet to cover most of the topics I mentioned in the last post.

I will be back, though, as often happens. And I will write more about things.

About eating rice pizza for example, in my kitchen, with the balcony door open, so that I could watch it snow.

Or discovering, with a new friend who's good friends with an old friend, a Vietnamese restaurant whose noodles and spring rolls are all made from rice. Not to mention their having a blackboard with their promise of cooking with love and patience written in English. Le Saigon is the name of this place. You should go if you're ever in the neighborhood.

Or, more likely, I will end up writing about different things and mentioning how I've forgotten to write about these things I just mentioned.

Alas. Such is blogging.