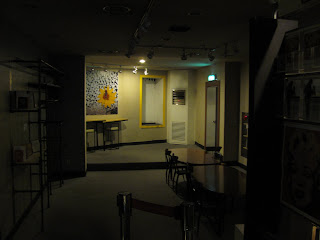 Last night I went to see Up in the Air, that movie with George Clooney and airplanes. It reminded me of Fight Club for a little while, and then it didn't.

There is a thing in Korea about aloneness. They don't like it. Or rather, to not be so generalizing, it would seem to me that many of the Koreans I have met, have expressed to me, or acted in such a way, as to convey the idea that being alone is especially lonely and heartbreaking to them. My head co-teacher, nicknamed Potato by his students, for example, always accompanies me to lunch, and when I go to the Home Ec room to warm-up my food, he follows me. It does not cross his mind that he could go on to the cafeteria and that I would, eventually, catch up.

It's not just Potato, though, that is this way. It's also Fesbl and my desk-mate Ming the Not All That Merciless But Actually Quite Kind (MNATBAQ, or Jim, for short).

"When we see someone eating or walking alone," Potato told me, "It looks so lonely. America is different. It' s normal. Here, it's not."

Sometimes this level of accompaniment is nice. Sometimes it feels a bit, well, like I'd rather be alone.

Sometimes it feels like coming to Korea was just another way to cultivate aloneness.

Odd how things work out. 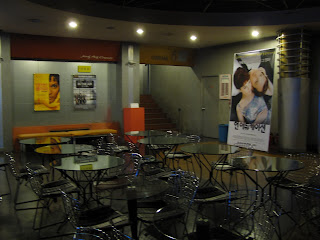 I bought my ticket for the 8:35 p.m. show at around 7:00 p.m. In Korea, when you buy a movie ticket, they assign you a seat. There's no general admission.

I had time to enjoy, so I wandered up the Myeong-Dong fashion avenue, saw many purses and gloves and one Panda Bear. I remembered there was a Bubble Tea place nearby called, Quickly. Quickly is a California franchise. The Korean woman who runs it here speaks English. I had some Thai-flavored bubble tea which tasted like Thai tea but with more tapioca. It was yummy. 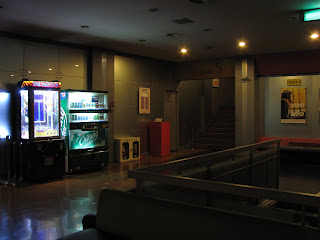 I walked back to the theater then, past again, the purses and gloves and Panda Bears. I waited on the second floor of the theater, wondering whether my ticket said Screen 5 or 6, since there were many numbers on the ticket including 2, 81, 8:35, and the aforementioned 5 and 6. At around 8:20, I decided to ask the lady standing in front of screen 6. She looked at my ticket, and looked at her watch, got flustered, and then unroped the entrance. She tore my ticket and waved me inside.

The movie was a quiet bit of wonderful. It did in fact remind me of Fight Club with its snappy cuts, ubiquitous airplanes, and the Tyler Durdanesque speech George Clooney's character makes concerning the freedom of leaving everything behind. Of flying solo, as it were.

But then, as I said, it stopped reminding me of Fight Club, because it became much more a film about a man stumbling into a sense of his own aloneness, and trying to determine whether, in fact, that is entirely what he wanted. Or rather, if maybe, life wasn't better with people to share it with.

There was even an Elliot Smith song tucked inside. There was a lot of good music tucked inside, actually, including a song sung by telephone to the director Jason Reitman by a man who had just lost his job. (Interviews with, presumably real*, people who had lost their jobs in real** life were also tucked inside.)

Clooney's character doesn't exactly decide at the end on the matter of his aloneness, which is good, because movies that end with characters deciding such things for certain are almost always less interesting than movies that end with characters having a sort of awareness in which you get the sense that maybe, possibly, something is different than it was before. That something, however small or large, has changed.

And then there was the song over the credits, "Up in the Air", which was sung, as I said, by a man who had just lost his job.

And while it played, something occurred to me. No one in the theater had moved.

Perhaps you are, or aren't like me, reader, but when I go see a movie, I do not leave until the last possible moment, which is sometimes an usher saying, "Hey, kid, the show's over. Time to go."

Usually, it is only me, and maybe, possibly, though not always, the people I'm with, if I'm with anyone at all, that stays.

Here, though, in the Sponge House, in Joongang Cinema, in Seoul, Korea, I was not alone. Everyone, all two dozen or so people, stayed and watched the credits, and waited until the lights came on and the ushers came in, before getting up and leaving.

One guy, sporting the--here--ubiquitous large round-rimmed glasses, could be seen wiping his eyes.

I took some pictures as I was leaving. You have been seeing them while you read this. 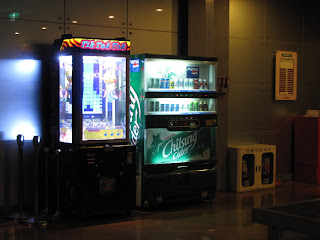 And now, very soon, I will go and look at furniture along the street next to my home. It's called the Furniture Arcade and there are many men who will shout at me in Korean about how wonderful it would be to have this sofa, or that dresser. I will not undersand them, of course, but I'll know what they mean.

After that, I'll go see an exhibition of Steve McCurry photographs with the Australian.

Right now, though, I will sit in my kitchen, alone and, for the moment, content, and finish my tea.

*This is not to say characters in movies are not real people, too, but here I'm using real in it's more common usage, which is to say, things which, so far as I know, were not scripted by a man named Jason Reitman.

**I do not know what real life is, either, readers, but it seemed like the phrase to use.